How to Play Livin Life by The Drop

In this Guitar Control video lesson instructor Jon McLennan is going to show you how to play “Livin Life” by The Drop by Stevie Ray Vaughan. Jon is going to break this song down into a couple of parts, he will cover the intro riff, the verse, the chorus, and some of the variations that he does. 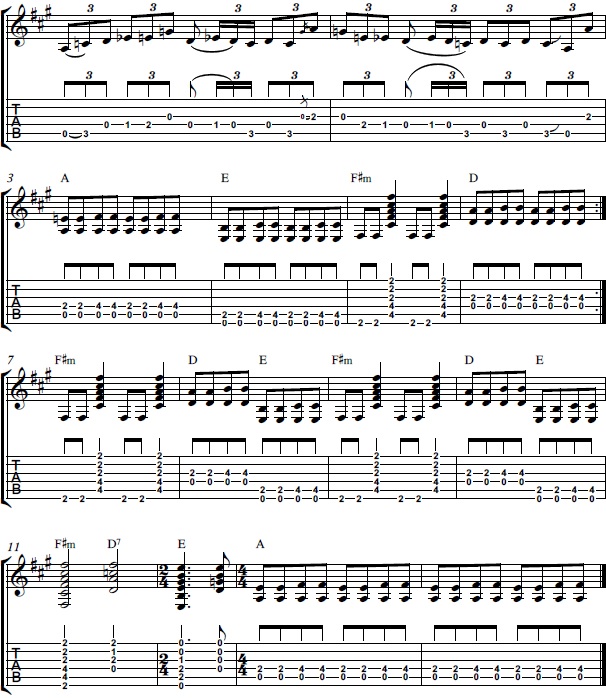 The opening phrase starts out with the 5th string, A, ringing open. Then you are going to do a hammer-on to the 3rd fret, 5th string using your third finger. A hammer-on is when you play two notes, but you only pick one. Then move your pick to the D string, the 4th string, and play three notes chromatically going up. All on the 4th string, pick then open 4th string, the 1st fret, and the 2nd fret. This lick in itself happens to be an A blues scale, which this song is in the key of A so he is just using some nice open string licks right there. Than pick the 3rd string open. These are all triplets too by the way. Then do this little trill, hammer on and pull off to open on the 4th string, then you smash your first finger down onto the 1st fret, and then you pull off, back to the open 4th string. So again, there i am plucking once with my right hand but I’m getting three different notes to sound out. Then you alternate between the 3rd fret on the 5th string, and the 4th string open. Then come back to the 5th string 3rd fret, to the open 4th string, back to the 5th string 3rd fret. Then end the measure with a hammer on, playing the 3rd string open, then on the 3rd string pick the open string to the 2nd fret. One thing that John is doing is he is using all downstrokes. So that is the first measure, let’s go to the second.

To grab that last note, John uses his first finger, because it sets him up for the next part, where he goes right into an A chord. This part is getting into the rhythm guitar part of this song. If you are enjoying this awesome song, be sure to check out How to Play Rock N Roll by Led Zeppelin for another classic blues rock song.

Now that we have that intro down, let’s get into this classic root 5 to root 6th style of blues rhythm guitar playing. Start by playing the open 5th string, then barre your pointer on the 5th of the chord, which is an E note, barring both the 5th 4th and 3rd strings with your pointer on the 2nd fret. So playing both of these strings together.

Jon kinda lays his pointer flat barely touching the rest of the strings in the 2nd fret to mute the unwanted strings from ringing out. So really just playing this two notes, he also wraps his thumb around the neck, grabbing the 6th string and muting that and keeping this chord sounding nice and tidy. Play this twice and then he is going to go to the 4th fret, on the 4th string, replacing the note we were barring with our pointer. So that is what Jon was talking about with the root 5 to the root 6th. Like a classic blues cliche rhythm. Now that you have these two voicing, practice rocking them back and forth.

One thing about Stevie is that he’s not necessarily just playing that straight back and forth, he is putting in a little rest. So if Jon does that in slow motion you can hear that it’s like playing the string, and then he almost rests on the string before he plays it again, playing each voicing two times with a rest in between before switching to the other.

Really dig in when you play this part, Stevie plays hard and with a lot of feel and emotion, always. Then take this same figure and you are going to move it up one string, basically relocated it to the E chord. So now you have an open 6th string and are holding down the 5th string 2nd fret with your pointer.

Now play two times on the open E5, shifting back and forth between this chord and changing the 5th to a 6th by using your 3rd finger to grab that 5th string 4th fret. Same rhythm, alternating between playing two open E5’s and two times playing the open 6th string with your ring finger holding down the 5th string 2nd fret. Move these two shapes back and forth. Now practice switching between these two chords playing each variation four times in a row before you switch. One thing Jon really loves about this song is that it’s blue but it’s not done in the traditional structure, which is the 12 bar. You will see this especially in the next chord, he has re harmonized it.

Then go to F# minor where he plays the full barre chord. Barring his pointer finger from the 6th string 2nd fret all the way down to the 1st string, then place your pointer finger on the 5th string 4th fret, and your pinky finger on the 4th string 4th fret. Jon actually double stacks his finger on the barre to give himself some extra strength, using his pointer and middle to hold down that 2nd fret. When he strums this chord, John plays the bass note twice before strumming all the way down, so focusing first on the 6th string and then strumming the rest of the chord. So picking the bass note on beat 1 and the and of 1 and the chord on 2, bass note on beat 3 and the and of 3 and the bass notes again on beat 4 and the and of 4. Then he moves to this D shape, which is basically the open 4th string and the 2nd fret 3rd string and goes back to that first shuffle rhythm switching back and forth between this voicing and playing the 4th string open and granting the 4th fret 3rd string to get that 6th. So to play all four of these bars, which we will be repeating twice, You have A, E, F#minor, D, and then all again in this same order.

Now for the final part of this lesson, the chorus. The chorus begins on an F# minor and we are going to do the same rhythmic pattern that we did in the verse. Playing two bass notes and then strum the rest of the chord. When Jon does this he plays the bass note but then when he strums he tries to not re-attack the bass note when he strums. This breaks up the guitar and adds more dimension to it, making it sound like almost two different musicians. Then you are going to go to this D pattern but you are only going to do half of the root 5th root 6 thing. So just half a measure on each, or two times through the alternating pattern on each, then to the next. So half on the D pattern, then jump all the way up to the open E, with the open 6th string and your pointer alternating between the 5th string 2nd fret and the 5th string 4th fret, strumming this pattern only half a measure or two times, just like we did for the D. So to do a quick review, you play F# minor for one full measure, focusing on the bass notes for beats 1 and the and of 1 and 3 and the and of 3 and a full strum of that F# minor chord on beats 2 and 4. Then half a measure doing the same blues shuffle from the verse for the D chord, and the same for the E chord.

John plays it by using his middle finger to actually bar both the 5th and 4th strings on the 2nd fret instead of using your middle and ring, and then he still holds down the 3rd string 1st fret with his pointer finger. Play the chord this way is kind of a Tommy Emmanuel thing. It is definitely hard, especially when using a 12 string guitar like John is for this lesson. Then he kind of just plays these open strings, which whenever you have a chance to just let the open strings ring, that’s great. Letting them ring open right before he goes back into the shuffle blues.

Throughout the song, sometimes instead of just playing D in the blues shuffle rhythm, he will just play D7 and let it ring. He will also sometimes do this little pull of thing, and that’s really cool. He basically does the same rhythmic pattern but instead of going to the 4 the last time, he goes to the 3rd fret 5th string and pulls it down just a little bit, then plays the open 5th string, and then goes up an octave to grab that higher A on the 2nd fret 3rd string. So that would be another variation. He kind of does that last one at random. One time on the 3rd time one time on the 4th, definitely not a worked out thing, just a blues lick he randomly decided when to throw in.

The only other variation happens later on in the chorus. So instead of when he does the half measure on D to the half measure on E, he will do this lick. Open 4th string, to the 2nd fret hammer on to the 4th and back to the 2nd fret all on the 4th string. Then pick the 2nd fret 4th string twice and hammer on again to the 4th string, coming back to the 2nd and then placing your ring finger on the 5th string 4th fret to end it. Then right back into the chorus chords. So adding that fill in in between the three held out chords, and ending the entire song with just the three held out chords.

Recap: How to Play Livin Life by The Drop

I hope you enjoyed learning how to play “Livin Life” by The Drop. This is a great song, but a guitar hero. Such a cool song to even sing and play too, which so much style and special moments that set it apart from a typical blues. Pay close attention to detail and use this song to inspire you to create your own slight different from the norm blues jams.

How to Play U2’s Every Breaking Wave on Acoustic Guitar

How to Play Sitting, Waiting, Wishing By Jack Johnson

How To Play Heaven By Warrant On Acoustic Guitar

How To Play Before The Dawn By Judas Priest

Learn How To Play Starlight By Muse

The GUN to the head technique