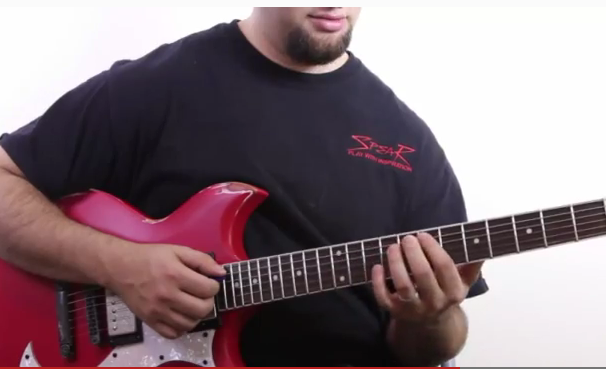 It’s always good to be able to switch
up your rhythm playing by changing
from strumming to fingerpicking.

One problem is that it can be a pain
in the butt to memorize these fingerpicking
patterns.

But I have one that’s so simple, it’s
hard to forget it.

It’s only a four note pattern and
it works great!

Okay, guys, today I have a very simple
picking pattern that I think you’re going
to really dig, very simple, very easy
to do, but it sounds cool. So let’s
check it out.

Now, I switch to the G chord. Same
pattern: E, G, D, B. Then I go to an A minor.
And here the whole pattern shifts up
one set of strings because I don’t have
a low E string in this chord. So my lowest
note of the chord is the A string. Again,
shift up a whole set of strings. Instead
of low E, G, D, B, we have A string, B, G, E.

You can use this on any set of chords.
Now when you have a D chord, for this
you can just do D string, B, G, E. So
you’re just replacing the lowest note,
but the rest is the same as if you were
playing the open A as the first note.

These two patterns, again, if you’re starting
on the low E string like a G chord or an E
or an F, whatever you’re doing, or like an
A7 barre chord, it’s always going to be
E, G, D, B. And then when you have a
chord that starts on the A string,
like this E minor 7, we’d have
the A, B, G, E.

And then with the right hand,
when I’m doing — I’m just picking
with the pick and using either of
my middle or my ring finger, it really
doesn’t matter, to pick the G string and
then I pick the D string with my pick and
then get the B string again. So it’s like
pick, finger, pick, finger and it’s a
pattern you can apply to anything. It’s
really simple to memorize, just four
notes. Try it; have fun with it.

Thanks for watching and once again, if
you haven’t checked-out our new guitar
course, Eclectic Electric Guitar Volume II,
go check it out. You can read all about
it at eclecticelectricguitar.com. Once again,
I’m Claude Johnson and I’ll catch you
next time.

How to Play Dear Prudence On Guitar [Beginner Friendly Video]

How to Play Sweep Picking Lick in G Minor On Guitar

How to Play Satisfaction by The Rolling Stones