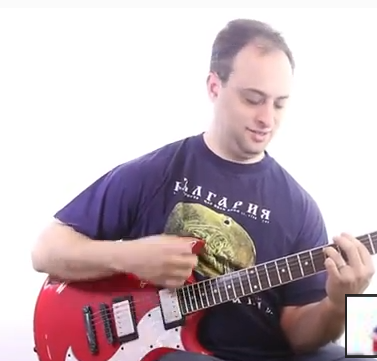 Hey, guys. Claude Johnson here from guitarcontrol.com and today I just want to show you this strumming pattern. I’ve shown this a couple of times in the past in Chord Mastery and also the Ultimate Beginner Guitar Course. If you’re familiar with my teachings, then you’ve probably seen this before. But I just want to show you again because it’s super useful and here’s a new place that I don’t think I’ve ever shown you that you can use it, which is the minor blues progression.

The strum pattern goes like this: one, two, three-and, four-and; and, two-and, and, four-and. It sounds complicated, but it’s actually very useful, just great to get that.

Anyway, you have this one-and, two-and, three-and, four-and. Now, with this particular pattern what we’re doing is we’re taking the and of the last beat, so the four-and, and you’re stretching that out. You stretch that out and you actually don’t say the one of the next bar, because it kind of runs into that. So it’s three-and, four-and, and, two-and. And it happens again there, stretching to the 3rd beat of the second bar.

Now the chord progression is basically a minor blues in the key of G. So we have G minor 7; barre chord. Again, I also cover barre chords in my beginner course. Then you go to the IV, which is the C minor 7, back to the I. Now the turnaround for this, what I was just playing — I actually was playing D7 to C minor 7 and then back to the G minor 7. So that’s an interesting variation on the minor blues turnaround, is you play a dominant chord on the V. I actually got
that move from Otis Rush.

Just real quick, other things I was doing was you get that percussive sound. Sometimes you can mute with your palm, but in this case I wasn’t doing that. I was just lifting off a little bit with my finger and just strumming it open.

Also, pay attention to the dynamics, how hard or soft and then you can also watch strumming the lower part of the chord to get those bass strings or the higher strings to get that treble-y kind of sound. So play around with the dynamics. I hope you enjoyed it. Take care.

How To Do The Funk Guitar Strumming Techniques

strumming for beginners, arpeggios for advanced!