How to Play Guitar Licks With SuperCharged Solos

Here´s another sample of my new lead guitar course… 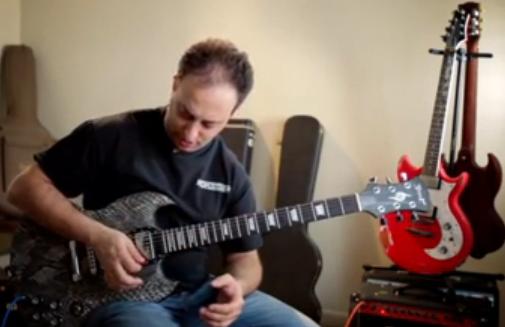 More Killer Lead Guitar Licks from Supercharged Soloing
By the way, when I’m playing these I’ve got the heel of my
hand kind of holding down the lower strings so they’re not
making noise. I just kind of naturally do that unconsciously.

So this next lick is kind of a classy blues lick. It’s got
a little bit of flashy texture. You’re in the root position,
A pentatonic, starting on the 5th fret B string. You start
here and then you do a triplet, descending down and then
I’m going to do a little sweep starting here and then I’ll
end up here. So real slow. And when I’m picking this I’m
going to do a downstroke to start with and then an upstroke.
I’m not even really picking the B string when I go back down.
Sweep. It really doesn’t matter how you pick some of these.
The idea is just to get fluent so you’re not even really
thinking about picking too much. You can also end this one
like this. Or you could kind of end here and bend up. And
then end it up by going into a different kind of blues lick.

So this next one, we’re in the key of D. We’re going to do two
bends and then kind of slide down. So it sounds like this. We’re
going to bend and release. That’s on the B string. Then I’m going
to bend on the G string. So we’re just kind of connecting the dots.
But then I’m going to slide down from here down to here and pull-off.
So you get a really nice, cool effect by sliding and just kind of
falls into a classic, kind of straight down the scale.

So that brings me to another point. When you’re writing your
own licks, you want to try to use a combination of stepwise
motion, which is just kind of going one note at a time, and
then also jumping around different intervals.

If I’m in the key of D, maybe up here. Notice, — let’s just
take that lick, which I just made up right now. I’m starting
at the top, going down and then back up. Then I jump and then
I walk one note at a time. By using the combination of jumping
and going one note at a time you can come up with some really
cool stuff.

So this next lick goes like this. I’m using three notes per
string and tapping and again, we’ll get into all this stuff
a little bit later in detail. But what I’m doing is I’m doing
this pattern, 10th, 12th, 15th with my first finger, middle
finger and pinkie. And then tapping on the 17th fret. So I’m
going all the way up and back and then up again, just to the
15th. And then I hammer-on to the B string 12th fret and then
on the B string I go down on the 10th fret and then walk it
back up to the 17th.

How To Play 3 Fun & EASY Billy Squier Riffs For Beginners

Learn to play 3 fun and easy Billy Squier riffs with Guitar Control instructor Darrin Goodman, aka Uncle D. Be sure to get the free