How to Play Key to the Highway on Guitar: Eric Clapton BB King

Hey, how’s it going this is Jon McLennan with Guitar Control, hope you’re doing fantastic and thanks for checking out today’s lesson called “Key to the Highway” by Eric Clapton BB King. It was originally credited to Big Bill Broonzy, but we’re going to be looking at the Clapton BB King version.

I’m going to show you how to play rhythm through the whole song it’s an 8 bar blues and then we’re going to look at some soloing, and also how to play off the melody of the song so let’s zoom in and break it down. The version that I’m going off, is the one with Eric Clapton and BB King it’s called from a CD called “Ridin with a King” and it’s really a variation of the 12-bar blues. If you know your twelve bar blues, this is an eight bar blues and again it’s just three chords.

Let me start by showing you sort of the basic rhythm that I would do and then we can talk about some other elements. First up, the first chord is an a7 sort of shape, then we have an e7, and a d7, what I like to do in the blues is do a root fifth, root six, sort of rhythm cliché. 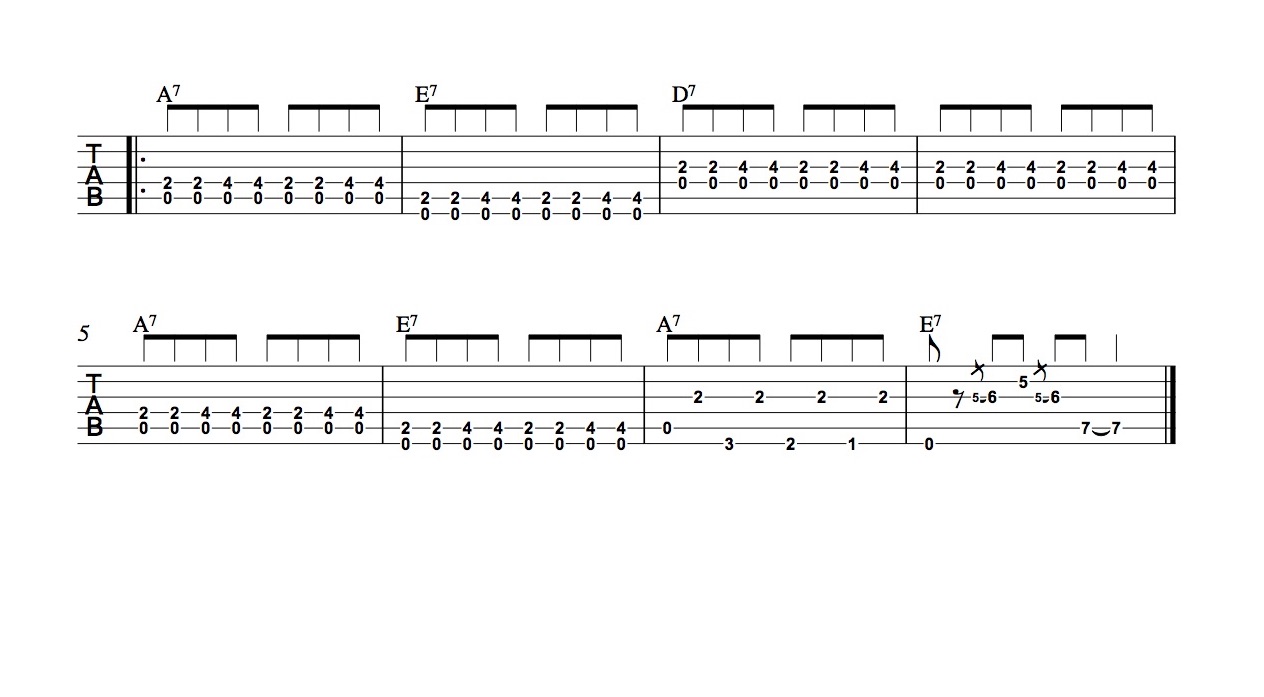 Start out by playing the open 5th string and then the 2nd fret on the 4th string, those two and I palm mute, I do that twice one and then add my third finger down to the 4th fret and it replaces that note on the 2nd fret.

That’s one going twice as long, so it’s one bar of a, one bar of e, two bars of D, so hear what that sounds like, now we’re getting some blues feeling. Let’s do this again one, two, three, and four. Next four bars we’re going back to that a, and going to alternate a, e, a, e, one measure each that would sound like this, and were back at the top.

Let’s do the second four bars again one, two, three, four, now in the last two measures I like you to do this thing called a turnaround lick, a melodic phrase it could be cool, it could be chords too, but basically a piece of music that turns us around and has character to takes you from the end of the blues back to the top and you hear it on a lot of records, here’s the one that I’m picking for today, and I do this.

What I’m doing is keeping this a note second fret 3rd string, as every other note and then I’m walking a bass line down like this zero, three, two, one, zero, that’s on the lower string and every other note to.

The way that I figured that was kind of grabbed an a chord with one finger and put either my second or third finger down at the 3rd fret either and then go to my second finger and use my third finger, now left that A shape to go to this configuration of just two fingers the second finger, third finger, then it helps me get down to the next and the e, and then I do this.  Just you hear that million blues guys do that, and I’m including a 7 chord on like that which is basically a C chord just moved up here with your pinky at it.

Also another variation where you can do something like, which is a nice one, that would sound like this, “A Stormy Monday” kind of thing or “Crossroads” by Eric Clapton’s version. Let’s see if we can take all this together, we’re going to play it’s an 8 bar blues we’re going to play six of those bars as basic rhythm and if we’re playing the chords behind Eric Clapton or Beauty King singing and then we’re going to drop that turnaround lick, which is going to legitimately make us sound authentic and legit in the blues style. So here we go one, two, three, hey and comes that turn around

Let’s go back to the top again, this time I’m not going to play it turn around. Either way I like using the turnarounds because they sound like authentic pieces of the blues language. So you’re going to play that chord progression a lot of times over and over and there’s a million things we can do with what we just learned, you could also try playing the same thing and like slipping in some full chord version for an instance like on that Clapton guitar track, I’m pretty sure it’s Clapton not BB King.

I know BB King doesn’t like playing acoustic guitars but Clapton does, I may experiment mixing in some actual full chords I can play in a7, a, e7, or g7, or even put an F sharp in the base, Clapton loves that move.

Let’s talk about soloing over these changes, we’re in the key of A, it’s going to be an a blues scale which is cool to know and let me give you a little different approach that’s sort of what most guys will teach you playing from scales and stuff.

What about if we tried playing off the melody of the tune? Which is an approach I like to use a lot, meaning if I play the notes that the singers sing, I’ve got the key to the highway part, let me give you an example of that first. So here we have a little rhythm track we got one, two, and three.

I’m kind of thinking the way a singer would go, so I’m playing those notes using that as a platform to solo and you’ll hear Clapton at the beginning of this tune, you know he’s going you know build out and bound to go that’s what he’s playing off is that motive walking slows, so what I’m doing is I’m starting off 9,11 on the third string and then playing ten on this second string and then I’m banding 12 and then that’s another band 12, then another band 12.

I can get a lot by playing a couple of notes here and again it’s coming from the BB school, you know this be like the BB box and then going up one string and bend that on the 12th fret, bring it down and then back up and do a pre band then 10. Now I’m going to do that same and then this is the Walkins moves too slow that would be 9, 9, 9, 10, 12, up the octave to 10 and you hear that all the time.

They’re all great ideas that you can solo with and they’re coming from the melody of the song so you have this connection to the tune rather than just playing scales or know your go-to licks like the melody of the song and people are going to dig it. Let’s try it again, that would be how I would approach soloing and you can just see with a couple of licks how much music can make.

Thank you so much for watching I hope this lesson helps you out and inspires you to keep learning more about the guitar lesson. Make sure to subscribe on our You Tube Channel and we’ll see you in our next video lesson, thanks for watching.

How to Use the Blue Note On Lead Guitar