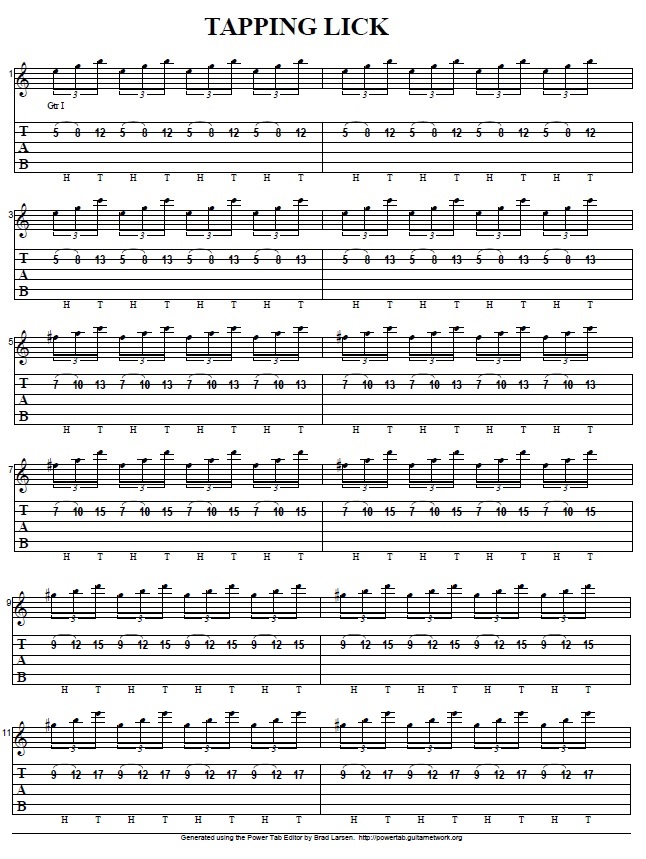 Hey, everybody. How’s it going? This is Darrin Goodman with guitarcontrol.com bringing you this video lesson. Today I want to do a beginner tapping lesson in the style of Eddie Van Halen, so be sure to click on the link in the description for the tabs, and let’s get close up and take a look what we got going on here.

All right, so we’re starting off among the fifth fret of the second string with my first finger, and then I use my fourth finger for this hammer on here, but you can use your third finger if that’s easier for you. Anyway, so you put your first finger on the second fret of the second string, and then with the finger you’re going to tap with on your picking hand, we’re going to tap at the 12th fret. So a lot of people, they’ll put their pick down, or put their pick in their mouth and use their index finger. I like to use my middle finger so that way I can keep a hold of the pick, because there’s lots of cool licks you can play where you pick and then you tap notes, so it’s just a habit for me to play it this way, and I recommend that this is how you do it.

So we’re going to start off, we’re going to just simply at the 12th fret you’re going to pluck the string to get the… So that way you’re fretting the note on the fifth fret, and getting basically the sequence started. So you pluck and then do a hammer on to the eighth fret, and like I said, I’m using my fourth finger. You could use your third finger, whatever is easier for you. And then tap with that… I’m using my middle finger on the 12th fret, so this is all the second string.

So, what we’re doing here is we are playing those three notes from an E minor chord. So it’s the first, flat third and fifth of the major scale, or the first, third and fifth note of the minor scale. And then you just simply repeat this. So after you tap, and then you remove your third finger, and then you pluck the string again to get the sequence started over. Just like that.

Now, when you’re doing this technique, one thing that’s really important is that you don’t want to hear the other strings making a bunch of racket while you’re trying to do it. So if you’re just playing like this, you’re leaving the other strings kind of susceptible to making a bunch of noise. So what I’m doing here is that my first finger where I’m fretting this note on the fifth fret, the underside of my finger, the pad part here, is just lightly touching the first string, so that way it’s muted and doesn’t just start vibrating and making noise. And then with my picking hand, my right hand, I’m resting the palm of my hand on the lower strings that I’m not playing, so I’m just isolating just this second string. Just like that.

So first of all, especially if this is a completely new technique to you, you’re going to want to just practice this, just getting this down. And then to the 17th fret. Now, after you have that down, you can do variations on it. So maybe we could go… Move, the tapped note back and forth. Stuff like that. Now, you could also move the notes that you’re playing with your fretting hand, so we could move it… Stuff like that, and it’s a little bit more challenging to do that, and I just kind of thought of that right now, so I haven’t practiced it. Just stuff like that. There’s so many variations of things that you can do with this. It’s probably the easiest thing to get down that sounds cool. Whenever you tap something, people seem to dig it. It’s total ear candy.

All right. Well, I hope you enjoyed that and you got something out of it. If you liked this lesson, give me a thumbs up. Leave a comment down below if there’s something you’d like to see, either myself or one of the other instructors at guitarcontrol.com do in a future lesson. Anyhow, that’s all I’ve got for you today. So until next time.